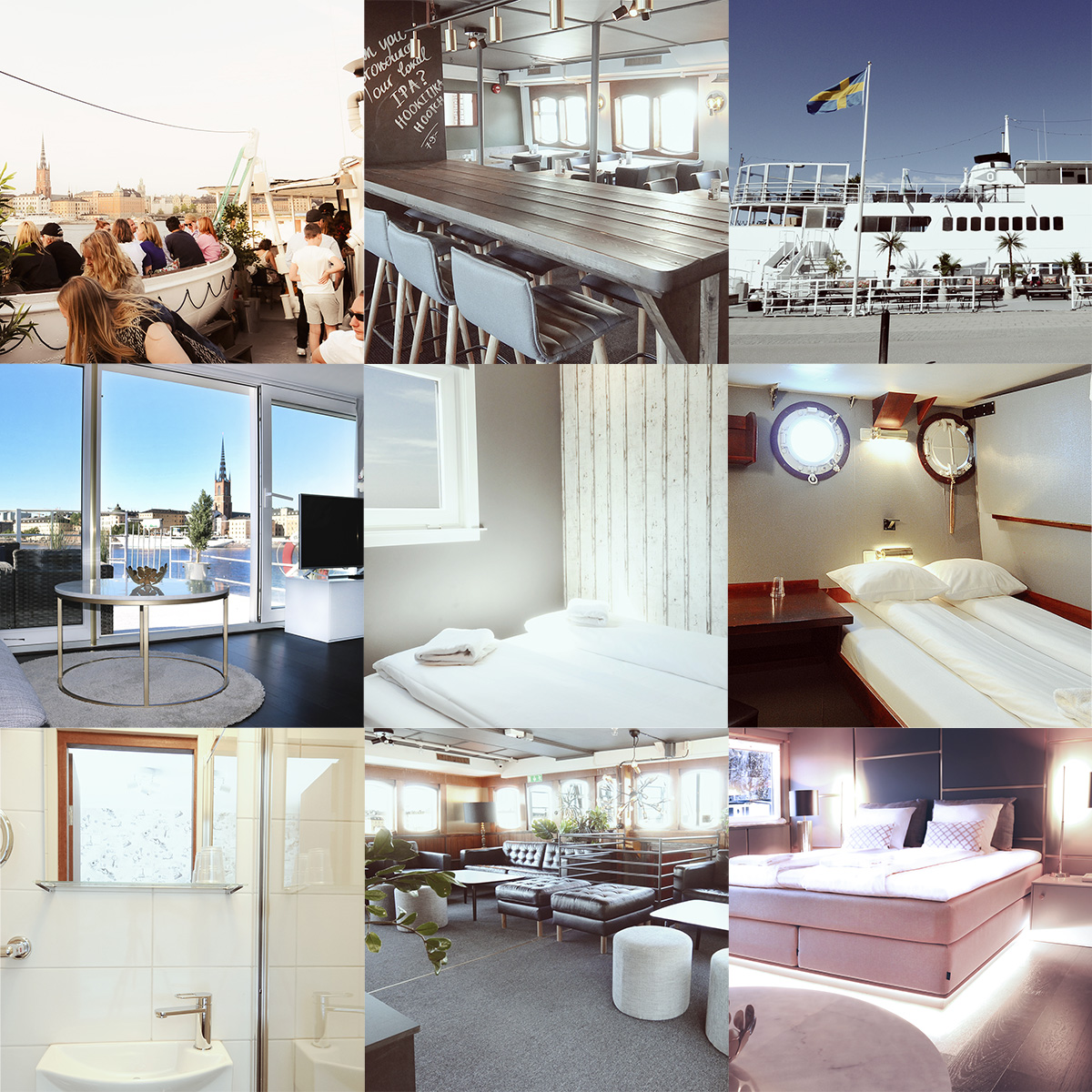 On one boat, you have free access to the guest kitchen where you can prepare your own breakfast or other food.

At check-in, you’ll have the opportunity to add on our popular, Scandinavian Breakfast Buffet.

Hungry or thirsty…? Welcome to our Restaurant and Bar, with a magnificent view of Lake Riddarfjärden and Stockholm City Hall! We serve classic Swedish food.

Nice weather…? Have a seat on The Port Deck, our sunny terrace on top deck!

Questions, regarding accommodation or food & beverage..? Please contact us – our crew is here for you!

Rygerfjord was built in 1950 at Mjellem & Karl’s shipyard in Bergen, Norway, as the 70th edition.

The vessel was contracted originally in November 1948 by a Norwegian shipping company Hardanger Sunnhordlandske D / S in Nordnes at a cost of NOK 2 057 . At launch September 22 she was given the name Kvinnherad by Evy Greve.

The new ship had a difficult start, the machinery was not functioning as it should and the test ride could not take place until 11 May 1950. She was taken over by other clients and made two presentations tours, one from Bergen to Siemfoss on May 13 and one to Tysnes and Kvinnherad on May 14

Her service was then between Bergen-Rosendal and Bergen-Sunndal. Unfortunately she was having constant engine problems – no fewer than eight in one year – and was finally taken in to a shipyard to correct her problems.

In 1956 radar was installed and she was sold the following year for 2 million NOK to Ofoten D / S Narvik when her export license to Finland was denied. She was now given the name Tranøy.

1958 she was taken to Kaarbös mechanical workshop in Harstad for rating and was now partially rebuilt with side doors and rear deck house. Her size was revalued form 498 GRT to 526 GRT. ( Gross Register Tonnage)

In 1961 her Crossley machine was replaced with a Wichmann and she could now do 12 knots.

In 1966 Tranøy was sold to A / S Fire Boats in Sykkelven and was placed in traffic from Narvik under the name Fire VII. The following year she was stationed in Ålesund and rebuilt with new cabins.Her volume was now 544 GRT.

During the winter of 1970/71 the boat was renovated, and the stern boat deck was built. She was revalued at 601 GRT and was classified for 100 passengers as opposed to the previous 365

In 1984 the vessel was sold to Aanen Nilsen Shipping A / S in Kopervik and two years later she was completely renovated.

In 1988 L Redness & Sons A / S in Kopervik became the owners of the vessel and on January 26th she was renamed RYGERFJORD.

On the night of the 27th of July 1989 the 70 passengers aboard the boat got quite a scare when the boat was on its way from Bergen to Nordkap. The boat suddenly became stranded on the position 61’35’N, 05’E.

The crew and passengers were rescued ashore, but the captain died of a heart attack. RYGERFJORD could be drawn out with minor injuries.

In 1991 the ship was taken out of service. She was stationed in different places as a missionary ship, for example in Randaberg and then in Bergen where her toilet system was sealed.

RYGERFJORD docked at Söder Mälarstrand at 6 o’clock on Midsummer’s Eve on the morning of 23 June 1995. She travelled from Norway to Stockholm by own machine.